The sundew is a strange and singularly beautiful plant, its name derived from the hundreds of glistening droplets that cling to its vibrantly colored tendrils. It also has a secret: it’s a carnivore, luring flies in with sweet smells and then trapping them in its sticky secretions, where they struggle in vain until they either suffocate or die of exhaustion. There’s a lesson there, maybe, about the perils of taking a lovely exterior at face value. Appropriately, if unfortunately, it applies just as well to The Sundew, the debut point-and-click title from solo developer Agnès Vuillaume. There’s no denying that the game is visually lush, setting itself apart in an era where pixel graphics are a dime a dozen; look beyond that, though, and you’ll find a directionless slog that seems to drag on for much longer than its five-hour playtime.

The Sundew takes place in 2054, years after a cataclysmic war shook the world to its foundations. You are Anna Isobe, a cybernetically enhanced police officer in Shibukawa, which has risen from the ashes to become Japan’s sole thriving metropolis. As a cyborg, Anna occupies a difficult niche in society: saddled from a young age with invasive modifications meant to mold her into a superhuman, she’s now been rendered largely redundant by cheaper and more obedient machines. Her peers see her as less than human, her employers as an obsolete relic; she has to undergo constant testing and frequent “upgrades” just to stay employed.

Against this background, Anna receives a routine assignment to meet an informant and apprehend a person of interest in an ongoing case. Things don’t go as planned, however, and Anna finds herself the target of a powerful organization at the head of a global conspiracy, forcing her to flee into the forgotten corners of the city in a desperate search for answers. All she has to go on are rumors: of the sudden inexplicable growth of carnivorous plants throughout the city, and of a mysterious island that no one can reach. Along the way she’ll come into contact with a clandestine resistance movement and seek common cause with the refugees who survive in the shadows, all in an effort to unravel a sinister technological plot that threatens humanity itself. 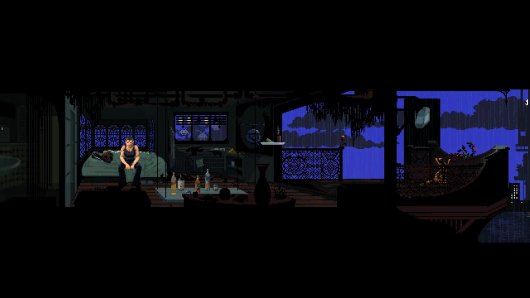 The first thing you’ll notice about The Sundew is how lovely its graphics are. The backgrounds are deep and detailed, with subtle animations that help bring them to life, and the side-scrolling pixel art aesthetic evokes early high-end VGA titles. The characters all have memorable, distinctive looks, with Anna’s posture and expression wordlessly conveying her no-nonsense attitude and wry sense of irony. Just looking at her and her fellow Shibukawans tells us a great deal about their personalities. (This is helpful, as the dialogue is unvoiced.) The color palette is wide and vivid, with neon-drenched cityscapes, snow-covered ruins and verdant jungle scenes all containing rainbows of their own; dismal and dystopian this world may be, but it’s never drab.

The Sundew consciously positions itself as a cyberpunk story, and it uses that genre’s familiar trappings to reckon with interesting philosophical quandaries. Anna’s world is an automated one, with drones and intelligent robots having displaced much of the labor force, and the script uses this and Anna’s cyborg nature to explore how its citizens are treated as mere machinery themselves. Cyberpunk, as a genre, coalesced largely around the idea that the powerless would always seek ways to fight back, even in a world where technology made their oppressors seem omniscient, and this game is at its best when examining similar themes.

Anna’s destructive relationship with her employers, for instance, invites consideration of the wider implications for her society, where workers are essentially their bosses’ property. Anna has a neural implant that connects her to a futuristic version of the internet, letting her take notes in her head and contact others just by thinking about them, but it comes with the high price that she can’t unplug voluntarily. This has frayed her nerves almost to the breaking point, as her bosses can intrude into her mind whenever they want and withhold upgrades and repairs as they see fit. As the game goes on we see that the protagonist is hardly unique–people here are expendable, and the only citizens with any hope are the ones who’ve found a way to escape into the shadows. 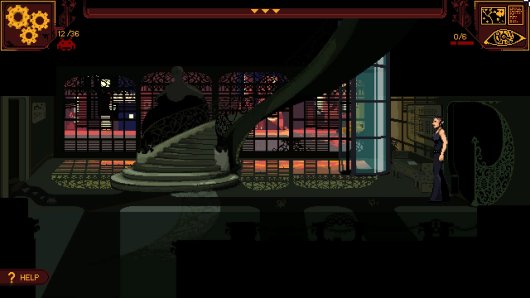 Most of the pieces were in place for The Sundew to tell an effective and thought-provoking cyberpunk story. Unfortunately, the elaborate inventory-based puzzles that make up the bulk of the gameplay are so poorly suited to the narrative in question that they undermine it at nearly every turn. They rarely arise naturally from Anna’s circumstances; most of the time they’re just there, taking up space and air for their own sake, for what feels like no reason except to fulfill the prophecy that says you need this sort of thing in an adventure game.

Anna, for example, has no motivation to try to fix a broken statue in a public square, and there’s nothing at all to suggest that doing so might cause a compartment to open containing items she’ll need for a different puzzle. The statue, then, shouldn’t be of much interest at all–except that Anna makes a big deal about how it’s missing a piece, essentially urging you to repair it without ever explaining why. This is hardly an outlier; there are frequent stretches where you’ll find yourself less in pursuit of a specific goal and more searching across multiple screens for whichever signpost marks the next puzzle.

It’s easy, too, to do things in the “wrong” order. More than once I stumbled onto something another character wanted before we’d actually met, rendering anticlimactic the eventual puzzle to find it for them. I also had the opposite problem, where I’d know I was missing something I needed but have no idea where to look for it because of how it blended into the background. The most egregious of these occurred when I was told Anna absolutely had to be somewhere in thirty-seven minutes—any later and what she was looking for would be gone. (This was in story time; there’s no actual time limit for the player.) Anna, as a hint of where to go next, says she has to use the restroom first, which is one screen away. You’re supposed to enter the restroom and encounter an unexpected development that keeps you there, except that it’s entirely possible to reach this moment without an object you’ll need once that happens. Rather than having already ensured you couldn’t get to this point without said object, the game has Anna announce that she’s just realized she forgot “something” in a previous location—meaning you won’t be able to proceed until you’ve called a cab, gone across town to the earlier area, figured out which to-this-point-unmentioned background item Anna “forgot,” picked it up, and called another cab to go back to where you were before …all so that Anna can finally use that one, specific restroom. 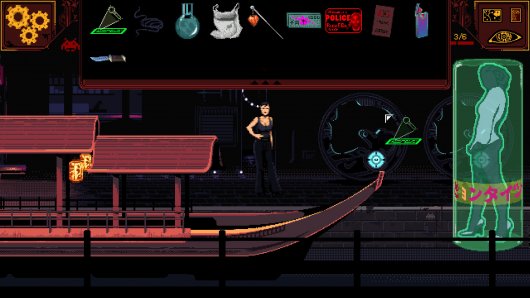 As you might imagine, all of this leads to a meandering story that never manages to convey the urgency we’re supposed to feel. Regardless of whether she’s running for her life, trying to beat the clock, or searching frantically for information that could mean life or death, Anna always has time for a side-quest or two. Seemingly important characters and plotlines are introduced suddenly, then vanish just as quickly when the puzzle they’re part of is solved. You never feel anything for most of the cast beyond a desire to move past them or get what they’re guarding, which significantly weakens the game’s attempts to tell a story that foregrounds the people of this future society and their fight to survive.

None of this is helped by an English translation that sometimes struggles to feel natural. It’s never egregious—whether or not they seem like native speakers, it’s mostly clear what characters mean—but it took me a while to realize that when Anna mentioned an “intercom” she meant her implanted long-distance communicator, and it was jarring when she called the head of a screwdriver its “nozzle.” There’s also some awkward phrasing, such as an early statement that Anna is “already no longer asleep.” On its own this isn’t a fatal flaw, but it serves to further distance the player from the story and its characters.

On top of all this, the interface is a mixed bag. The basics are solid: gameplay is of the traditional point-and-click variety with a context-sensitive cursor—left click to walk and interact, right to examine—and a drop-down inventory at the top of the screen. A separate mini-menu sits in the upper-right corner that houses Anna’s notes (where you can review your objectives), her communication implant (used to contact various characters), and the fast-travel map (explained in-game as a method for calling a robotic cab, or “bottaxi”). The options menu is in the upper-left, while a “help” button to remind you of the controls sits toward the bottom of the screen. 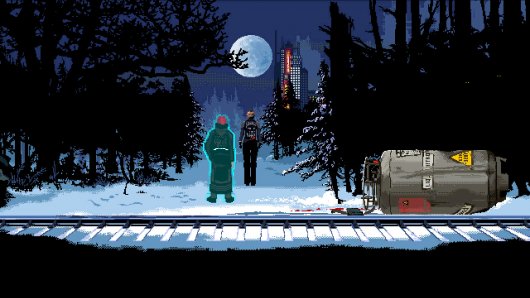 Some functions, however, are inexplicable, and drag the gameplay down without any clear purpose. One of these is the absurdly accelerated speed at which Anna moves when you double-click to run, as if she’s being sucked toward her destination by a high-powered magnet; as a convenience it’s nice to have, but it’s implemented in such a hilariously overdone way that it briefly shatters the serious tone in any scene where you use it. Stranger still is the way the game uses hotspots: hovering over these causes a text tag to appear under your cursor, letting you know what you’ve found, but the same happens over a huge number of irrelevant on-screen details. You can’t do anything at all with these except learn what they are, for no purpose except maybe satisfying your own curiosity, and the result is that each screen is littered with what amounts to a slew of non-interactive red herrings. The pixel-hunt segments would be frustrating enough without having to mentally sort through loads of irrelevant information; as is, they’re exasperating.

When the credits rolled on The Sundew, I just felt worn out. It seemed as if it had taken much longer than the time I’d actually spent with it, and not in the good way that comes of getting lost in a compelling story. There’s so much extra work involved in even simple tasks that I came to a point where I stopped caring what happened next; I just wanted it to happen quickly. Unfortunately it rarely did, and for the vast majority of time the game felt more like a chore than something I’d actually do for fun. It’s visually lovely, and it has a great deal of reverence for its predecessors in the cyberpunk and point-and-click genres, but there’s little else about it to recommend for anyone but the most die-hard completionist in either sphere.

The Sundew is available at: