Tandem: A Tale of Shadows review


Teddy bears can be a great source of comfort for children, particularly when they’re not feeling well, waking up from a nightmare, or seeking out a missing boy in an eerie trap-laden steampunk mansion… Wait, what? Okay, that last one may not be quite as common, but then, the stuffed co-star of Hatinh Interactive’s Tandem: A Tale of Shadows is no ordinary teddy bear. Fenton is the non-human half of the tandem in question, along with a little girl named Emma, in a stylish puzzle-platformer that nicely blends its two characters and gameplay elements into a uniquely designed whole. The story quickly fades into the background and the experience begins to feel a little repetitive at times, but it’s a slickly designed package with plenty of puzzles to solve that find the sweet spot for challenge between too little and too much.

Ostensibly the game is about the disappearance of young Thomas Kane, son of a family of famed illusionists. Fascinated by the Kanes and determined to help find Thomas, ten-year-old Emma takes it upon herself to investigate that very night. As fate would have it, along the way a living, breathing, but entirely mute teddy bear named Fenton is flung from a horse carriage on the streets of Victorian-era London before getting up and chasing it all the way to the Kanes’ own ominously gated mansion, with Emma trailing closely behind. Once inside, the two of them must work together in order to fully explore the luxuriously creepy home – and survive the many deadly, mind-bending perils that await.

I say “ostensibly” because once the door shuts behind you in the opening cutscene, the mystery behind Thomas’s disappearance all but becomes moot. There are no traces of Thomas to discover, no signs of a crime or other nefarious deeds. There aren’t even any cinematic narrative reveals upon completing the game’s forty-plus distinct levels across five full chapters. The only things that even hint at what might have happened are the rare “secret rooms” that offer vocal snippets when discovered but seem largely determined to remain hidden from all but the most thorough explorer. Even those offer only the barest of insights, which will have to last you right up until the end when … well, suffice it to say that while the climax is bold, it’s hardly the closure you might be anticipating as a reward for all your trouble. 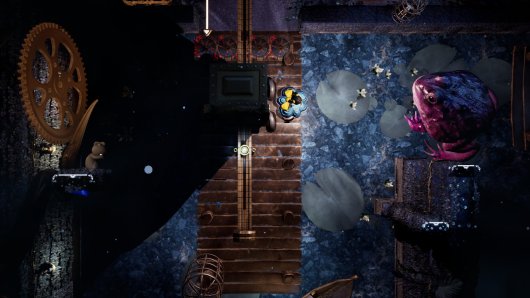 With the story relegated to an afterthought, really Tandem is all about the gameplay. Given its title, you might think it’s one of the increasing number of multiplayer co-op adventures, but this game is purely for one person alternating between its two playable characters. It’s not just cottony innards that distinguish the two protagonists, either, as Emma will wander the rooms and hallways via the floor, as you’d expect, while Fenton defies gravity and walks on the walls. Not only that, but while all the normal laws of physics apply to the little girl, Fenton is able to exist purely in a shadowy side-scrolling dimension where darkness becomes solid. These abilities are never explained in the least, but it’s a clever twist on the usual character-switching formula that lets both protagonists share the same real estate but never directly interact with one another.

Of course, different perspectives come with their own freedoms and restrictions. Fenton can simply waltz past any non-shaded obstacles that Emma down below cannot, such as locked doors, whirling fans, furnace blasts and patrolling enemies (more on them shortly). Then again, any wide open floor space for Emma means an impassable chasm of light that Fenton is unable to traverse on his own. The trick, then, becomes how to utilize the opportunities for each character to help the other overcome their limitations and proceed.

How this occurs varies slightly over the course of the game, but for the most part it’s the challenges that change, not the abilities of the two protagonists. Fenton mainly lopes along slowly and makes short jumps, meaning he gets all the platforming to access levers or pressure pads that enable new passages for Emma. In solving all the puzzly stuff, Emma can hold a single item at a time (keys needed somewhere nearby), as well as throw switches, push and pull objects with handles, and at times carry a lantern. The latter is very useful for casting shadows, making it an important tool early on, though Emma continually runs afoul of obstacles that will extinguish it. The lantern is abandoned before long, however, forcing you to find less direct means of manipulating the environment for Fenton. 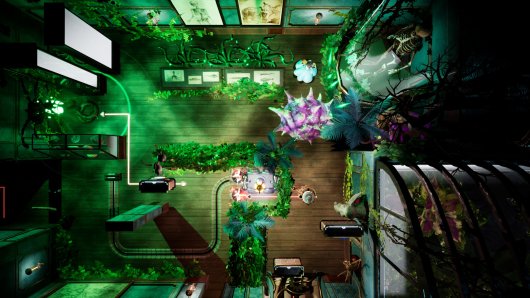 Initial solutions can be as simple as guiding a cart along its tracks to cast shade in a more favourable direction, but as the game goes along there are far more moving parts involved, as well as imminent danger. Both stationary eyeballs and mobile spider sentries with sweeping laser-like vision must be avoided or lured away, giant brambles can be reduced with exposure to light, and large rolling snails can be strategically rerouted to your advantage. Death is certainly possible but hardly punishing, simply resetting the scene to mere moments before the fateful event.

So too do Fenton’s challenges increase as you progress. He’s anything but an athlete – what with having no bones or muscles at all – so you’ll never need to perform any incredible feats of acrobatics. That said, you will need cool nerves and decently fast reflexes on occasion, as you leap between rotating gears with partly jagged edges, time jumps over moving traps, or activate a series of dials (by balancing on them) in the proper sequence with a timer rapidly clicking down. The keyboard and gamepad controls both work sufficiently, particularly for Emma, but the latter feels much more intuitive in the side-scrolling portions. Fenton can die as well, as the largest gaps inevitably seem to be filled with massive teddy-impaling thorns at the bottom. (What on earth could be causing shadows of those, I don’t even want to consider.)

The most interesting sequences require Emma and Fenton to coordinate their efforts more precisely, often under duress. Many levels in the first half of the game can be played largely at your leisure, but later in the game you’ll find yourself switching on the fly more and more frequently. For example, as Emma you’ll have mere seconds to redirect a swarm of flies to a new light source, swapping to Fenton to frantically maneuver him to a new position before the bugs return and knock him from his perch. It’s harder than it may sound, because sometimes you’ll need to position the protagonists just so. You can’t switch to Emma if Fenton is not on a solid surface, and you can’t switch to Fenton if Emma has left him engulfed in shadow. If you’re stuck you can manually “reset” the room, though this only takes you back to the most recent viable position. 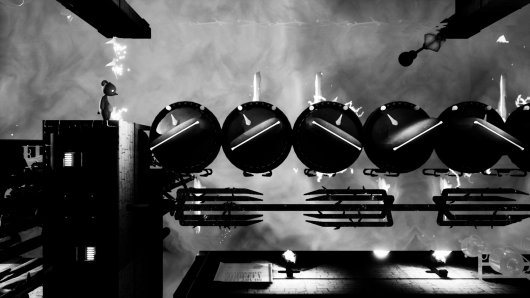 Nowhere is the … well, tandem approach more apparent than in the “boss fights” at the end of every chapter. One involves a fair bit of platforming and another is an extended chase scene featuring the least likely monster imaginable in an equally improbable dessert-filled landscape, while the others are more puzzle-focused than twitch-dependent. Even so, your ability to quickly alternate between Emma and Fenton is important to success, such as in one role reversal where Fenton must cast rotating shadows on the ground to conceal Emma from harm as she circles the room on a conveyor belt.

It’s a shame that the two protagonists don’t gain any additional powers of their own to help keep things fresh, as the levels do start to feel somewhat repetitive even with the changing elements. The obstacles will evolve, the elements for navigating and manipulating the environments vary, but the objectives are always the same – guide Fenton to a crystal that is easily found but hard to reach, apparently needed for reasons unknown – and you’ll perform the exact same actions throughout, just in different proportions and speeds. There’s enough here to adequately fill the six-hour playtime, but I usually found myself stopping after each completed chapter before a sense of monotony set in.

Though the differences may be largely cosmetic over the course of the game, what lovely cosmetics they are. The five discrete areas in and around the steampunk manor comprise the gardens, boiler room, kitchen, clockworks and greenhouse, but the headings alone sound far more conventional than they are. One chapter is heavily influenced by Jules Verne’s Twenty Thousand Leagues Under the Seas, filled with deep-sea paraphernalia and the skeletons of legendary creatures – not to mention the very alive squid-like creature watching over all. The gardens are home to oversized toads and koi, the kitchen contains living cubes of jello of all shapes and sizes (the shapes and sizes of which you’ll have a hand in deciding rather violently), while the greenhouse is of course home to all manner of unusual flora, all of which you’ll want to stop and smell but some you’re best advised to keep your distance. 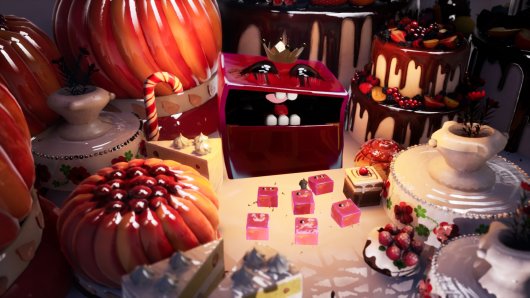 For Emma, each chapter has its own distinct palette, from cool nighttime blues to industrial metallic rusty browns to vibrant organic greens. Somewhat unfortunately, though perhaps inevitably, the overhead perspective limits its visual appeal. Secret viewpoints (highlighted with a subtle twinkle) show off a section of their respective rooms from a more traditional third-person view, and I always wanted to see more of those. It’s still a nicely animated presentation, but it sacrifices a degree of style for gameplay substance. This goes double for Fenton’s dimension; not only do you observe his scenes from the side, but they’re entirely in black and white. It’s not as immediately attractive, but with Emma’s scenes on the floor seen faintly in the lightened backgrounds, the chiaroscuro effect is striking.

The cutscenes between chapters are the only times we see Emma and Fenton together. I’d have liked them to communicate more – however one-sidedly – but given the underwhelming voice acting for Emma, maybe that’s a good thing. The French accent is rather charming (if peculiar in a London setting), but it’s clearly an adult voicing a child – a personal pet peeve. I have no such complaints about the atmospheric background scores. Some are deceptively jaunty, encouraging you to explore and enjoy this delightfully surreal world, while many feature more haunting and oppressive instrumentals and vocals, almost Burton/Elfman-esque in eliciting a paradoxically playfully ominous mood. Ambient noises are authentic enough, whether the wind and wildlife in the outdoor scenes, or the hissing steam and burbling fluids in the basement, but Fenton’s jumps are always accompanied by cartoonish boings.

Since the game is laid out in a board-game-style level screen, you can replay any level or chapter as soon as you’ve completed them. Other than possibly finding any secret rooms or vantage points you missed, there doesn’t seem to be much incentive to replay, and there’s no way to tell from the level-select screen which ones have unfinished business, although the locked achievements will indicate where secrets remain. Nevertheless, it’s certainly worth a single time through this stylish steampunk world if you’re a fan of puzzle-platformers. It relies a bit too much on its fundamental gimmicks; then again, the two overlapping but vastly different dimensions, designs and experiences between the two characters provide much more wiggle room than most. If only the story had worked hand-in-hand with the gameplay, it could have been great; as it is, Tandem: A Tale of Shadows is a solid puzzler for adventurers who can bear a little action as well.

WHERE CAN I DOWNLOAD Tandem: A Tale of Shadows

Tandem: A Tale of Shadows is available at: