There’s a part of nearly everybody that recoils instinctively from anything that tries too hard to imitate a human face, be it a mask, mannequin, or makeup job. Whether it’s simple trust issues or some evolutionary holdover from a time when recognizing camouflage meant life or death, one rarely feels totally at ease around a false visage. My Beautiful Paper Smile—originally released in part through Early Access and now available in full—takes place in a kingdom where citizens must wear rictus-grinning masks at all times, and the very sight of the so-called “Joyous” with their perpetual smiles is enough to let us know that something is deeply wrong here. That holds true for better and worse throughout the game, which manages a steady stream of solid scares against a dark and menacing background but whose gameplay never quite comes together to match.

The story takes place in an unnamed island kingdom whose ruling monarch has established a series of facilities to mold children into the Joyous: cadres of identically clothed individuals (tatty dresses for girls, shorts and an oversized jacket for boys) who are forbidden to remove the frightfully exaggerated masks affixed to their faces or to express anything like a negative emotion. Monitoring their development are the horned and hooded “Authorities,” adults with sewn-shut eyes and grins of their own, who administer daily batteries of tests on behalf of the king. Compliant children are allowed to remain and continue their “education;” those who deviate from the accepted norm are taken away and never seen again.

Players take on the role of Joyous One Eight Nine One, a boy living in Facility 12 who has recently been contacted by “the Lost Child,” an unseen spirit-being who tells him about the outside world and promises that escape is possible. (Apart from a few heavily-modulated audio clips the dialogue is unvoiced, with different sounds accompanying the various characters’ text as it unspools.) The Lost Child periodically helps One Eight Nine One slip in and out of his room after hours so that he can explore the facility in search of a way out. During one of these nighttime excursions, however, the Authorities abduct his bunkmate and only friend, forcing One Eight Nine One to quickly devise a plan to follow them to wherever the disappeared children go. His efforts will ultimately take him outside the facility’s walls and into direct conflict with the King, whose plans for the other boy run deeper and ghastlier than any of the Joyous would suspect. 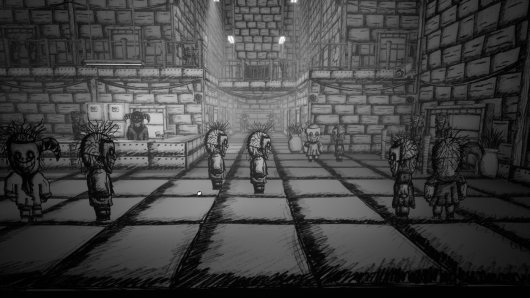 My Beautiful Paper Smile immediately distinguishes itself with its striking black-and-white visual style. Characters are portrayed using two-dimensional sprites that give the appearance of pencil sketches torn directly from a notebook, with a low-frame animation style that amplifies their paper-doll artificiality. It works beautifully, lending an uncomfortably uncanny quality to each person and creature you meet while bringing them to stylized, static life. Friend and foe alike are unnerving to look at, from the painfully unblinking stares of the masked Joyous, to the cruel leers and stitched eyes of the Authorities, to the truly upsetting faces of the monsters you’ll sometimes meet in the shadows. The environments, by contrast, are fully 3D, but their surfaces are visualized using the same charcoal-pencil art style that makes the gameworld feel like a drawing brought to life.

Jagged lines, rough edges, and frantic, scribbled shading lend an unreal quality to the environments, so that the waking-nightmare sensation of life under the Authorities feels baked into existence itself. Looking around, one almost feels that reality is fraying at the seams—that the rough, sketched-in quality of every surface is less a stylistic flourish and more a reflection of how the characters experience each moment. There are sudden shocks to be had here, yes, but just as memorable are the long, quiet stretches of subtle, building wrongness, where the only certainty is that things are going to get worse. The score is understated but ever-present, full of humming feedback, crackling static and muted, discordant chimes. It’s dark and impersonal, a constant reminder that your character is small and helpless in a big and hungry world.

Thankfully, navigating that world is uncomplicated: WASD to move and the mouse to interact, with the fist-shaped, single-function cursor extending a finger when you hover over a hotspot to indicate that you can interact with it. There’s no context-sensitivity here; whatever One Eight Nine One does when you click, that’s all he’ll ever do unless you find an item you can use. These are stored in your inventory, accessed through a button press, but for the most part once you acquire an object you’ll use it automatically where it’s needed. 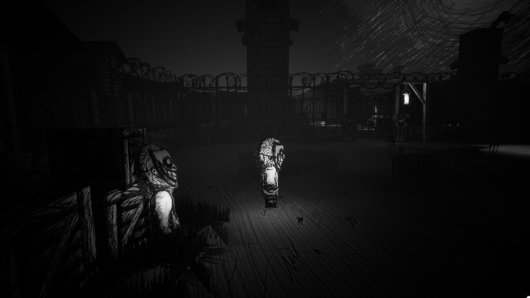 There are more slots in your inventory than you’ll ultimately need in any one chapter. Part of the reason for this is to accommodate the series of collectibles you can find scattered throughout all four parts of the game, which grant access to restricted areas at chapter’s end. The secrets you uncover there aren’t world-shaking—they mostly just lead you to details implied elsewhere but not stated outright—but the extra challenge of figuring out how they fit together is surprisingly elaborate, requiring you to note what you discovered in each chapter and eventually refer to a program included in the game’s install file. It’s entirely optional, but it adds an extra layer of complexity to reward those who look deeper.

A separate section of your inventory is dedicated to equippable items. The most significant of these is called a “Life,” which provides a light in the darkness when equipped with a button press but which makes you visible to enemies who might not see you otherwise. This means you’ll sometimes have to deactivate it for stealth’s sake, but there’s a trade-off: going too long without illumination allows the dark to close in steadily around you, eventually obscuring the entire screen before it finally kills you.

Dying is an ever-present threat in My Beautiful Paper Smile. You’ll frequently have to evade the searching Authorities—holding the dedicated sprint button, ducking into alcoves, unequipping your Life, and positioning yourself behind debris—as getting caught means an instant game over. There are worse things waiting in the shadows, too; each of the game’s four chapters features a boss of sorts who you’ll have to outwit or otherwise overcome in order to progress. The designs of these monsters are uniformly outstanding, particularly the spider-legged antagonist of chapter two, and the sudden sight of one hurtling out of the darkness never failed to send my heart rate a little higher. Further, each death screen features a sublimely horrifying closeup of the beast that did you in, and these are extremely effective across the board; no matter how many times I fell to a given enemy, the resulting image never lost its wicked bite. 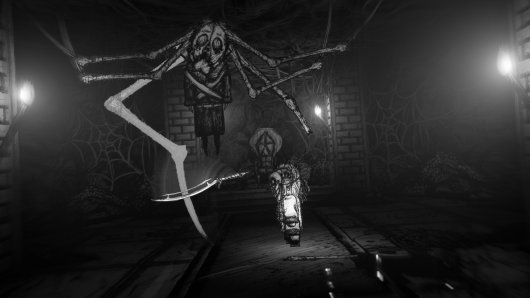 Still, getting a good look at who killed you isn’t enough to make death itself less frustrating. Dealing with the Authorities usually means running and hiding, but the arduous process of fumbling through the gathering dark after unequipping your Life means you’ll spend a lot of time without a clear idea of where you’re going. On top of that, the darkness-means-death mechanic can force you into a no-win situation where your only options are to draw the Authorities straight to you by re-equipping your Life or stay in the shadows and die that way. (Why, exactly, your bright light should attract a group of people with their eyes visibly sewn shut is anybody’s guess.)

Aside from the frequent stealth-chases, each chapter contains at least one arcade-style sequence where you’ll face an enemy head-on. A couple of these require ducking and dodging to reach the next part of a multi-step mechanism to bring your opponent down; more often, though, you’ll have to place a certain item in an equipment slot, setting it as your cursor to be swung or fired offensively with a left-click. Unfortunately the mouse controls are a poor fit for this kind of action, requiring precise timing and rapid clicking with so little room for error that a single miscalculation can mean starting the whole sequence over. (God help you if you’re using a touchpad.) These sections are never brief, and failing at any point along the way means starting again from the beginning. The game autosaves your progress as you move through a chapter, but it only does so at fixed points; this leads to a lot of tedious repetition, as it often takes several tries to figure out what’s even needed to overcome a given enemy.

Still, you won’t be running from death’s hungry jaws the whole time; there are plenty of long, quiet stretches where all you’ll have to do is avoid being seen while moving toward your next destination. There are puzzles to solve as you go, usually centered on opening blocked pathways or obtaining specific objects, but they’re rarely difficult. There’s a fairly low distribution of hotspots, and solutions are usually obvious enough that the only “challenge” is in keeping your eyes peeled for whatever item you know you need. The atmosphere is sufficiently creepy and the visuals are creative enough that simply experiencing the world can be its own reward, but much of what you do in it is slight and forgettable. 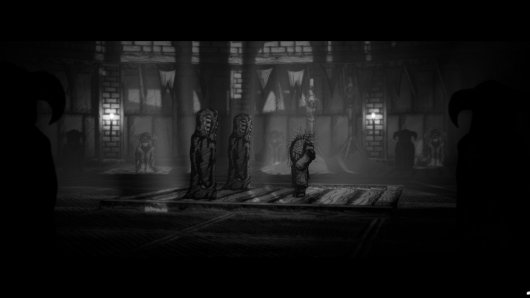 The story, too, feels somewhat insubstantial by the time the credits roll. For all the time taken early on to establish the Joyous, the Authorities and the society they’re part of, few of the concepts and themes the game seems poised to explore—the dehumanizing effects of totalitarianism, the powerlessness a child feels in a world that doesn’t view them as fully human, the emotional tyranny of a society that stigmatizes negative emotions and substitutes avoidance for understanding—end up playing much of a role in the narrative that unfolds. Numerous characters and plotlines are introduced along the way, only to disappear without any resolution; they feel less like organic story elements and more like devices to set up puzzles and gameplay sequences. Many of the specific details—the identical masks of the Joyous, the Authorities’ insistence on conformity and forced positivity, the backstories of the monsters you encounter—feel like mere window dressing for a simple, familiar story common to much of fantasy fiction, in which a humble hero rises from obscurity to challenge a powerful evil.

All that said, My Beautiful Paper Smile was clearly developed with very definite intentions as to what it should look like and the emotions it should evoke, and on those fronts it succeeds. It provides an unsettling experience full of hideously inventive monsters, with a unique art style that helps place you deeper into the protagonist’s frightened, frayed mindset. Not everything works, and the story is simpler than it might seem at first glance, but if the prospect of spending several dread-suffused hours in a hand-drawn world of horror appeals to you, then it’s probably worth seeking out a spot of your own among the Joyous.

My Beautiful Paper Smile is available at: